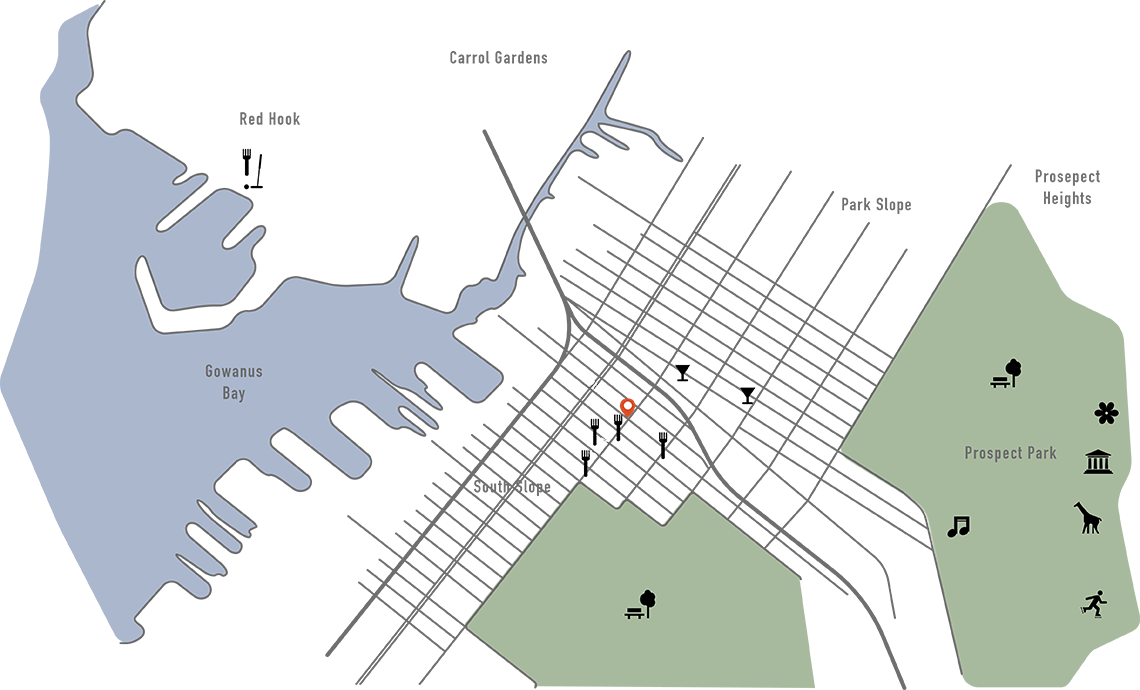 A Nation Historic Landmark, Green-wood Cemetery's beautiful, 478-acre site is open to the public. Guests are free to walk the grounds, take a guided tour, or attend one of the numerous events.

Designed by Frederick Law Olmsted and Calvert Vaux after their completion of Central Park in Manhattan, Prospect Park offers a wide array of amenities to neighborhood residents. Spanning 585 acres, the park feature sports facilities, outdoor concerts, Brooklyn's only lake, a zoo, and the 90 acre Long Meadow.

The Bandshell features a wide variety of outdoor events, including rock, jazz and classical concerts as well as movie screenings.

This 52 acre garden features numerous "gardens with in the Garden" including the Cranford Rose Garden, the Japanese Hill-and-Pond Garden, and the Shakespeare Garden. The Garden is, however, most famous for having over 200 cherry tree including over 40 different species and varieties, making it one of the best cherry viewing sites outside of Japan.

Spend an adventurous day exploring the Prospect Park Zoo, where you can see over 100 species of wildlife.

A dazzling French Renaissance-style ballroom that suggests "Mozart on Ecstasy" according to Time Out New York, this event space dates back over 100 years. It also houses the Brooklyn Bavarian Beirgarten.

One of the best Central European restaurants in New York, Korzo is particularly famous for its burger, which is wrapped in Hungarian flatbread and deep-fried.

Luigi's Pizza is a neighborhood gem dating back to 1973. It has received numerous honors, including being named the 2008 Best Pizza winner by the Village Voice.

A homage to Maryland style crab shacks with an outdoor beer garden featuring miniature golf and other outdoor games.

A nautical themed gastro pub with a lovely garden.

Equal housing opportunity. Exclusive Selling Agent for The Hutwelker Condominium and 251 19 th Street Condominium: Time Equities, Inc., Licensed Real Estate Broker. All marketing materials including the marketing floor plans, photographs, and the artist and computer renderings are provided for illustrative purposes only. Sponsor reserves the right to make substitutions of material, equipment, layouts, fixtures, finishes, appliances and landscaping in accordance with the terms of the offering plan. Sponsor makes no representation or warranties except as may be set forth in the offering plan. All dimensions, areas and square feet are approximate and subject to normal construction variances and tolerances. Sponsor makes no representations as to the future or continued existence of any of the named, described or portrayed establishments, structures or facilities. Sponsor makes no representation that future construction in the neighborhood surrounding the condominium will not result in the obstruction of the views from any windows and/or gardens. The complete offering terms are in the offering plan available from sponsor. File # CD 15-0108 for The Hutwelker Condominium, 249 19th Street Brooklyn, NY 11215 and CD 15-0076 for 251 19th Street Condominium, 251 19th Street Condominium, 251 19th Street Brooklyn, NY 11215. Sponsor name for both condominiums: 655 Fifth Dutch Equities LLC and 655 Fifth Maiden Equities, LLC, 55 Fifth Avenue, New York, NY 10003.